Tom Bennett, twitter royalty or godfather of the Twitterati occasionally catches some “tit-bit” from the antipodes to tweet about.

This week he provocatively responded to a comment from Jane Caro, a celebrity public schools advocate who was on a talk show decrying the stress that standardized tests put on students. 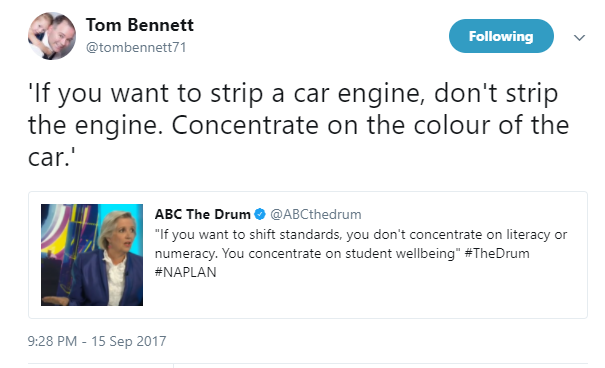 I love Jane’s passion for public schools. I work in one and boy do we need every bit of help we can get but I don’t share Jane’s views on NAPLAN.

For those international readers, NAPLAN is the National Assessment Program – Literacy and Numeracy in Australia.

It was introduced in 2008. It is a national standardized testing program carried out in all Australian schools in years 3, 5, 7 and 9. It tests Reading, Writing, Grammar and Punctuation, Spelling and Numeracy.

NAPLAN was brought in as an essentially “no stakes” diagnostic test. Students who did badly suffered no consequence and students who did well received no benefit. It was sold to us as a way of measuring the effectiveness of our schools’ programs. For parents, it was a diagnostic report on how their child was doing at school compared to all the other children in Australia of a similar age.

For the first few years of NAPLAN that was certainly the case.

After three years of NAPLAN the government decided to publish the school’s results on the “MySchool” website. Any parent can look up any school in Australia and see the school’s NAPLAN results. The stakes for schools grew but it was still largely a “no stakes” test for individual students.

Opponents of NAPLAN tests suggest that the advent on MySchool meant schools put undue pressure on students to perform on the tests. The inevitable narrowing of the curriculum was said to be occurring. Drop the Arts, PE and Technology and focus on Literacy and Numeracy because they are on the test.

There was a ramping up of pressure on schools to generate better NAPLAN results. I watched Daisy Christodoulou’s presentation about assessment delivered at ResearchEd. She cautioned the use of test results for purposes other than to diagnose what individual students actually know.

The uses of NAPLAN for measuring system-level performance is certainly a danger.

After 9 years of the benign “no stakes” nature of NAPLAN tests, the situation changed at Year 9. Two states have decided to use the results of NAPLAN as part of the senior school qualification. In response to “declining standards” as identified by “industry groups”,  a minimum standard of Literacy and Numeracy has been added to the graduation requirements for the senior school certificate.

In NSW to get your Year 12 certificate, you have to reach at least Band 8 NAPLAN standard in Reading, Writing and Numeracy.

If you don’t reach that level on the Year 9 NAPLAN test students have to take additional online tests until they reach that standard.

Students who don’t meet Band 8 will get two chances every year over the next eight years (in years 10, 11 and 12 and then for five years after that) to meet the minimum standards by passing online tests before they are eligible to receive their HSC.

Up until 2017, Year 9 students could do the Year 9 NAPLAN and basically not try at all. Now the test has some stakes added to it. If you “blow off” the test in Year 9, you’ll have to pass it at some stage later on to graduate.

The Jane Caro’s of the Australian Education Media ran the headlines about the stress the additional stakes the Year 9 NAPLAN now had. The narrative was all about the pressure these tests were putting on students, the anxiety they created and the stress and mental health issues they caused.

So what did attaching some significance to the outcomes of the test do to student performance?

You be the judge. Here are the NSW results. 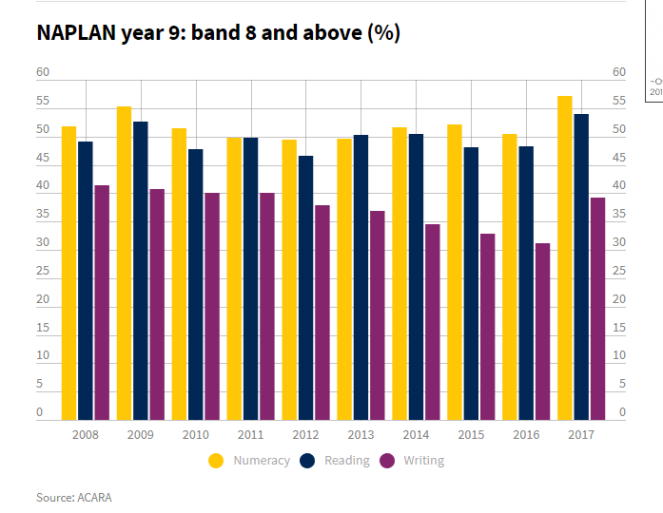 That is a massive jump in performance between 2016 and 2017 in Numeracy, Reading and Writing.

I very much doubt the changes to the teaching and learning environment in NSW English and Maths classrooms changed significantly between 2016 and 2017. My hypothesis is that more students gave a damn about doing well on the tests.

The change in NSW results was significantly different from Victoria’s results. Victoria did not implement the requirement for a band 8 standard to graduate. The Victorian results did not improve like the NSW results did. In fact, they went backward in Reading, Writing, and Spelling.

Marzano talks about skill and will when students don’t achieve.

Of course, in some situations, you get an unhelpful combination of both a lack of skill and a lack of will.

Clearly attaching some significance to the tests makes some of the students who lack the will, change their tune.

To complete this controlled experiment next year I want Victoria to implement the graduation requirements with the corresponding media firestorm about students stress.

Maybe a little bit of stress is OK.

It certainly did not hurt the level of achievement of NSW students.

The Goldilocks principle states that something must fall within certain margins, as opposed to reaching extremes.

The Goldilocks principle applies to the stress, pressure, and anxiety we want students to experience because of testing.

Not too much stress but not too little either.

One thought on “The Goldilocks principle of student stress.”